For the past few days I’ve been having a lively twitter debate with my friend and colleague Seema Iyer of the Baltimore Neighborhood Indicators Alliance (BNIA). We’ve been arguing about the spatial mismatch hypothesis and whether it’s to blame for the hardship suffered by residents of Sandtown-Winchester, Freddie Gray’s Neigborhood. The spatial mismatch hypothesis, introduced by economist John Kain in a seminal article from 1968, and holds that “Serious limitations on black residential choice, combined with the steady dispersal of jobs from central cities, are responsible for the low rates of employment and low earnings of Afro-American workers” (Kain, 1994).

The essential argument is that jobs (particularly low-skill jobs) are suburbanizing faster than low-income African Americans who remain in inner cities due to housing market discrimination. Thus, the hypothesis holds, the physical separation between jobs and workers causes high unemployment and low-wages in inner-city neighborhoods. Although the empirical record on spatial mismatch has been mixed, it has been touted as a primary driver behind urban inequality for decades, and was implicit in Wilson's assertion that deindustrialization had major negative externalities on urban social structure.

The question at hand is whether Baltimore's residents (specifically those in Sandtown-Winchester) are physically separated from skill-appropriate jobs and the answer to that question requires an examination of the Baltimore region's spatial structure. Having published a study like that, I'll show that Sandtown-Winchester has better job access than anywhere in the state (regardless of skill level or mode of travel), and I'll explain why spatial mismatch is not the problem facing Sandtown-Winchester, or Baltimore for that matter.

Where Are Maryland's Jobs?

First of all, it's absolutely true that Baltimore City is losing jobs to the suburbs and has been for some time. But there's more to the story than simply the declining prominence of an aging rust belt city. 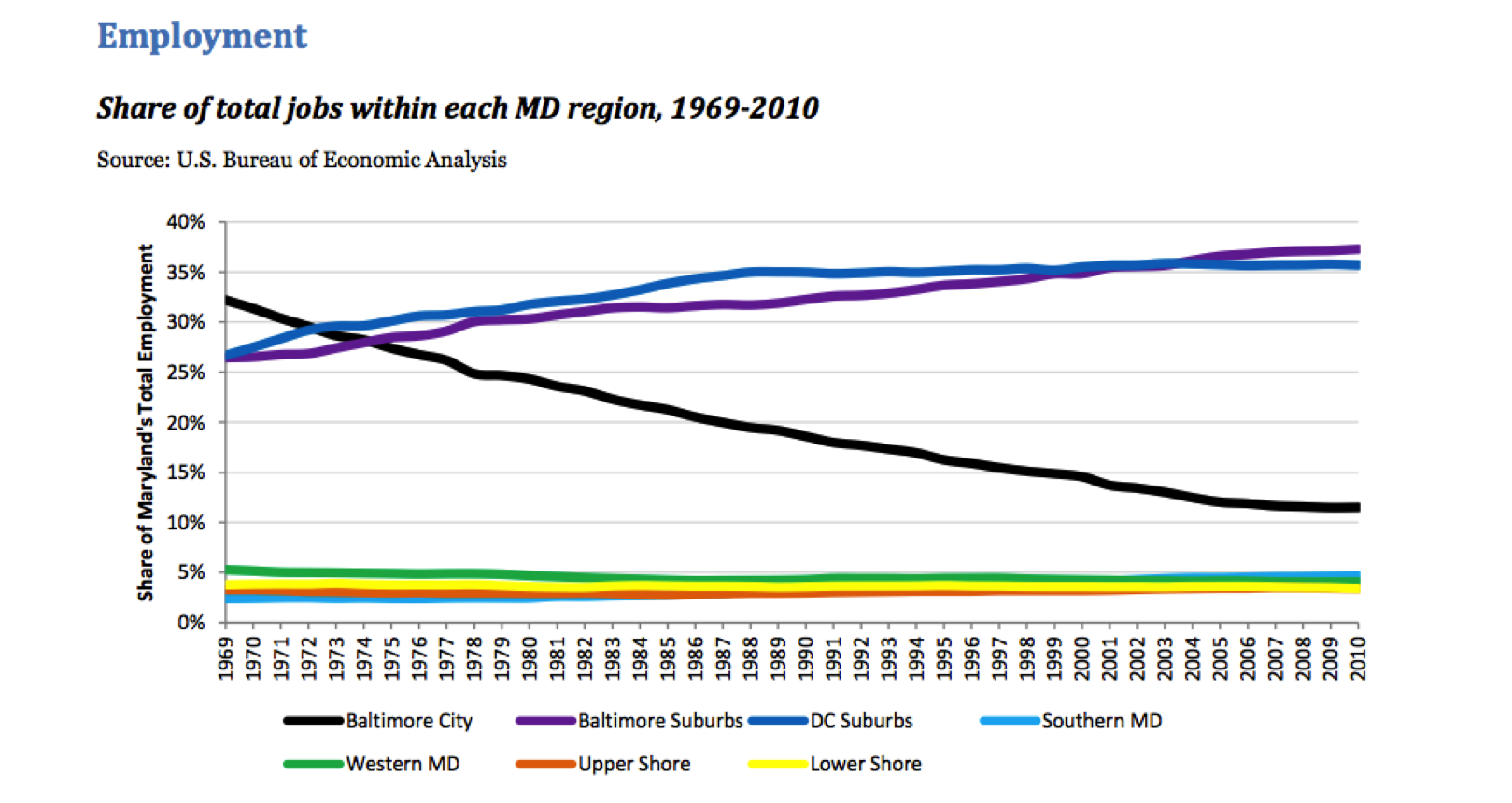 At the NCSG, we've done a lot of work studying the spatial structure of Maryland's economy. Using establishment-level microdata from the Maryland Quarterly Census of Employment and Wages (QCEW) we identified Maryland's major employment centers--places with at least 10,000 jobs and at least 8 jobs per acre.

So while Baltimore has been losing jobs to the suburbs, those jobs haven't simply been decentralizing. Instead, they have been moving to polycenters, many of which are located in the inner suburbs like Towson, Woodlawn and Halethorpe that surround the city in a tight ring.

More importantly, despite job losses, Baltimore City is still the largest and densest employment center in the state--overwhelmingly so in its region. If you want more details, here's a big unwieldy table, or you can read the paper. 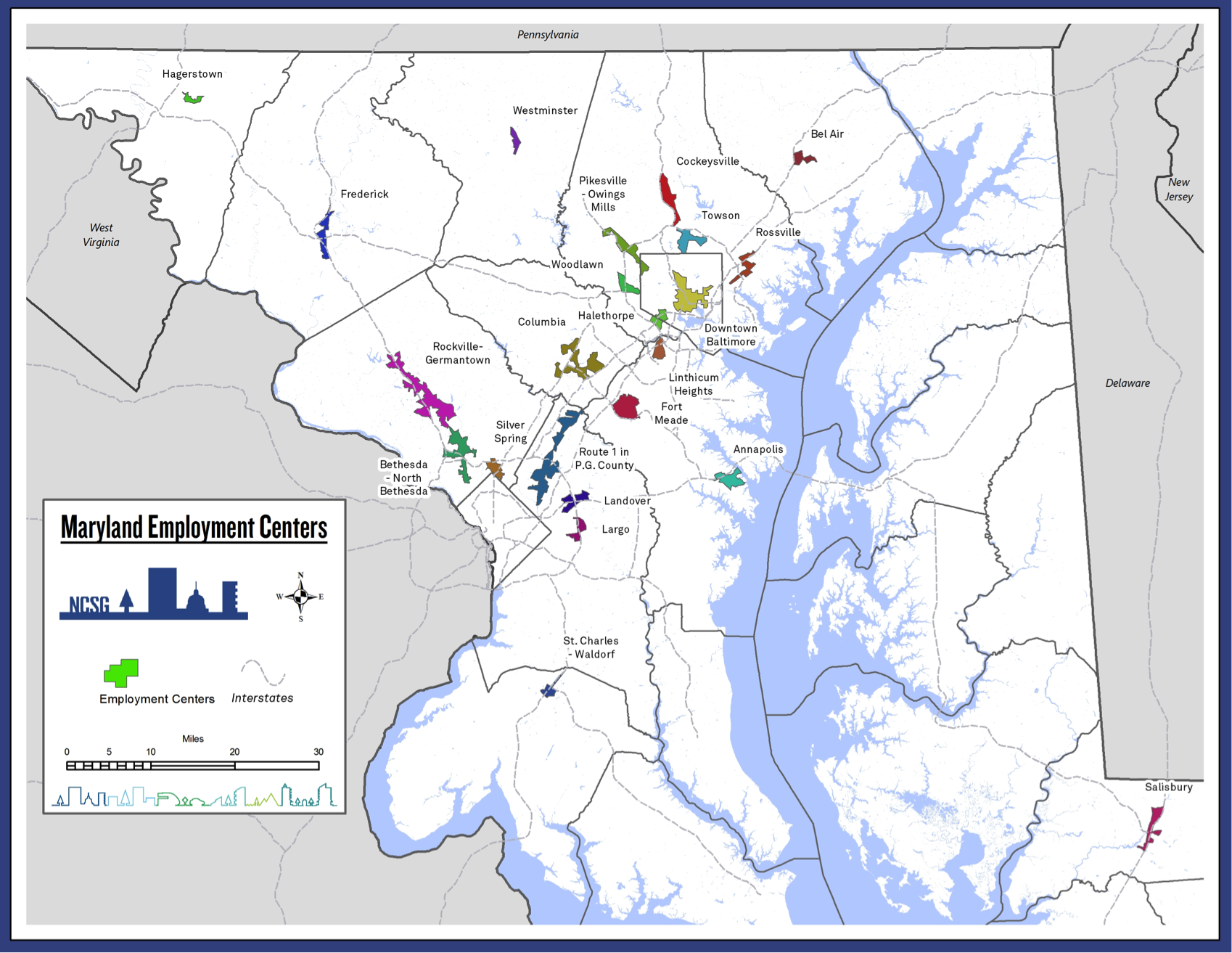 My debate with Seema began over an op-ed recently published by NextCity.org about the National Neighborhood Indicators Project and the importance of local data intermediaries. Overall I agree with the piece and I think both NNIP and its local partners do great work. But I took serious issue with this statement about Sandtown-Winchester:

"The neighborhood lacks highway access and is poorly served by public transit, leaving residents cut off from jobs and services."

It's clear that Sandtown-Winchester has suffered distress for decades, but it's simply not true that residents are cut off from jobs and services. I think this is an incredibly common misperception, but it's easy to disprove with readily available data. Within a 5 kilometer walk along the pedestrian network (about 45-60 minutes) from Sandtown-Winchester there are about 180,000 jobs, about 45,000 of which require a high school diploma or less. Apart from a handful of neighborhoods nearby, that's far more jobs within a walking distance than anywhere in the entire state of Maryland.

The map below demonstrates that point. It shows the number of low-skill jobs accessible within a 5 kilometer pedestrian trip from each census tract in Maryland. Mousing over each census tract will show the total number of jobs accessible at each skill level. The analysis uses Longitudinal Employment Household Dynamics (LEHD) data from the Census, which is a good (though not perfect) source of data on employment. The LEHD tables, which are released every year at the census block level, contain data on the total number of jobs in each block, broken down by industry and skill level. Specifically, LEHD has information on "workplace area characteristics" (the location of jobs) by the education level of the worker (Less than High School, High School Diploma or GED, Some College or Associates, and Bachelor's or Advanced Degree). For simplicity's sake, I collapse the first two categories, so that low-skill jobs refer to those requiring a High School diploma or less. Mid-skill jobs are those requiring an Associates Degree, and High-Skill jobs require a college degree or greater.

These data are then fed into pandana, a network analysis library written in python, which is part of the excellent Urban Data Science Toolkit. Pandana grabs road network data from OpenStreetMap, and removes things like highways and interchanges that aren't safe for pedestrians. It then calculates the number of jobs a person could reach within a specified walk or bike trip for each census block in the state (note that I'm displaying accessibility with tracts in the map below because the block file is too large and will probably crash your browser).

The code and data necessary to recreate the analysis are on github.


If you spend some time mousing around the map, one of the things you notice is that there's not much spatial variation in skill level. In other words, in most places, low-skill, mid-skill, and high-skill jobs are all relatively even. When there are large clusters of jobs, they cater to a variety of skill levels. Part of the reason for this is agglomeration in the form of urbanization economies. Another reason is that any reasonably sized employer requires employees of many skill levels. An office full of MBAs also has interns, clerical staff, and janitorial staff. I've pointed out before that Baltimore has great job accessibility, but zealous defenders of spatial mismatch cling to the belief that somehow Baltimore only has high or mid-skill jobs, and that the low-skill jobs are elsewhere. The map makes it clear this is not the case.

So why did I spend my weekend writing a post about this? Two reasons. First, I think there's an important lesson about confirmation bias and drawing conclusions within the scope of the data. Second, as a scholar of urban inequality, I think it's imperative to be clear about what the problems facing Baltimore City actually are. Otherwise the policy solutions will be misguided. I'll address these in turn.

It turns out that much of this discussion was motivated by the Vital Signs report recently released by BNIA. The report, which is an excellent summary of Baltimore's key neighborhood indicators, finds that Sandtown-Winchester has one of the largest shares of residents commuting 45 minutes or more. Long commutes have their own negative implications for social equity, but many people, it seems, took that as evidence that Sandtown-Winchester faces spatial mismatch.

That's a non sequitur; it's a perfect example of confirmation bias in action, and it's dangerous. When someone like @urbandata cries wolf to his 53,000 followers, misinformation spreads quickly. 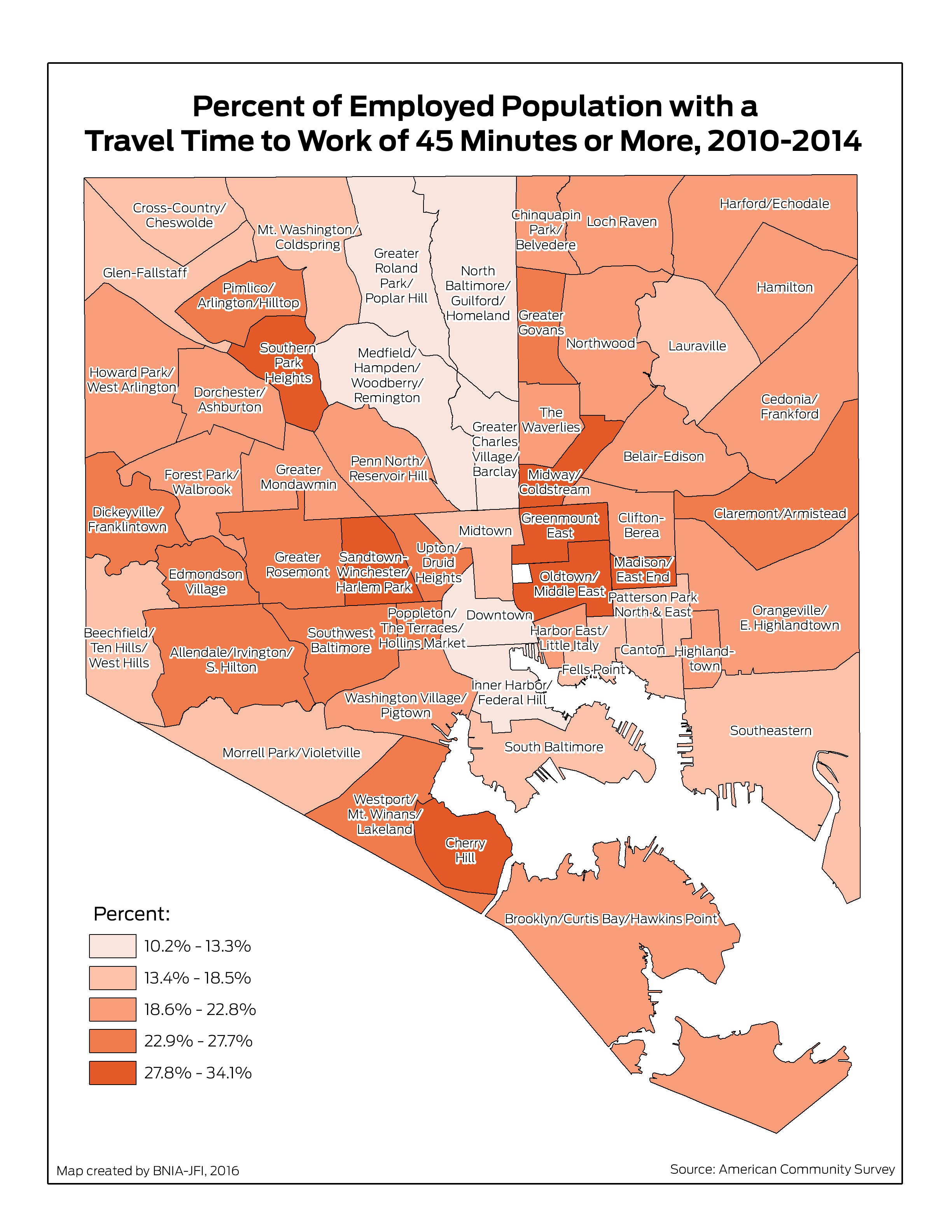 The fact that Sandtown-Winchester has a large share of commuters traveling 45 minutes or more tells us... well, it tells us that residents of that neighborhood have long commutes. Nothing more. From that data point alone, we don't know where they are traveling or why they are traveling to a certain place versus another. We certainly can't conclude that, because commutes are long, there are no jobs nearby (should we conclude that Chris Ingraham had poor job access because he chose to commute 90 minutes each day to his work at the Washington Post?). The only way to draw valid conclusions about the spatial distribtion of jobs is to examine the spatial distribution of jobs.

So why are the commute times so high in Sandtown-Winchester? Well, the average transit commute in the Baltimore region is 55 minutes. The fact that Sandtown-Winchester has such long commute times may not reflect spatial mismatch, but simply that many residents take transit to work. Or it could be that people are reporting the time it takes to drop their kids off at school as part of their commute. Or it could be that people are actually traveling to jobs that are far away. Any (or all) of these things could be true and that's exactly the point. Observing people's travel behavior does not tell us about the jobs they could potentially hold. As an academic, I'm formally trained in skepticism (and cynicism), but the general public is not, so this distinction needs to be abundantly clear.

At the root of the spatial mismatch hypothesis is Kain's assertion that African Americans in inner cities face labor market disadvantages due to housing discrimination. I have no doubt that is true. But the reason I spent this weekend attacking spatial mismatch is because physical proximity--lack of access--to jobs is not the cause of low wages and unemployment in Baltimore. Instead, the work I've presented briefly here leads me to agree with Ellwood that "race, not space, remains the key explanatory variable." And for that reason we cannot continue to be distracted by this red herring, otherwise we will continue to overlook other systemic problems to which we might formulate solutions.

If you believe in spatial mismatch, then the policy prescription is to increase access to jobs for inner-city residents. This can be accomplished by adding jobs to the city, increasing transportation connections to the suburbs, or providing opportunities to reside in the suburbs. This makes spatial mismatch an appealing problem because it is tractable and has straightforward solutions. We have far more policy levers to influence spatial structure than social structure, but that doesn’t mean we should define the problems in terms of the solutions we have prepared.

Finally, I want to point out that this doesn't contradict the arguments for public transit investments in Baltimore, it just reframes them. Transportation is a barrier to residential choice far more than employment access. It's important to consider the pathways through which spatial mismatch is hypothesized to affect employment. The dominant narrative is that unemployment is high because jobs are inaccessible. An alternative view is that low income residents remain in inner cities because they have access to jobs. Although Baltimore's transit system is limited, it does exist, and it facilitates access to jobs and other services. This severely limits the residential choices of low income transit dependent residents. Such residents are confined to a few neighborhoods, most of which face extreme segregation, high crime rates, and underperforming schools--exactly the type of environments where neighborhood effects impede success.

Baltimore absolutely needs a regional public transit system. But it needs that system to facilitate freedom of choice so that current Baltimore residents can live in any neighborhood they choose, and retain their ability to commute to jobs in the City.